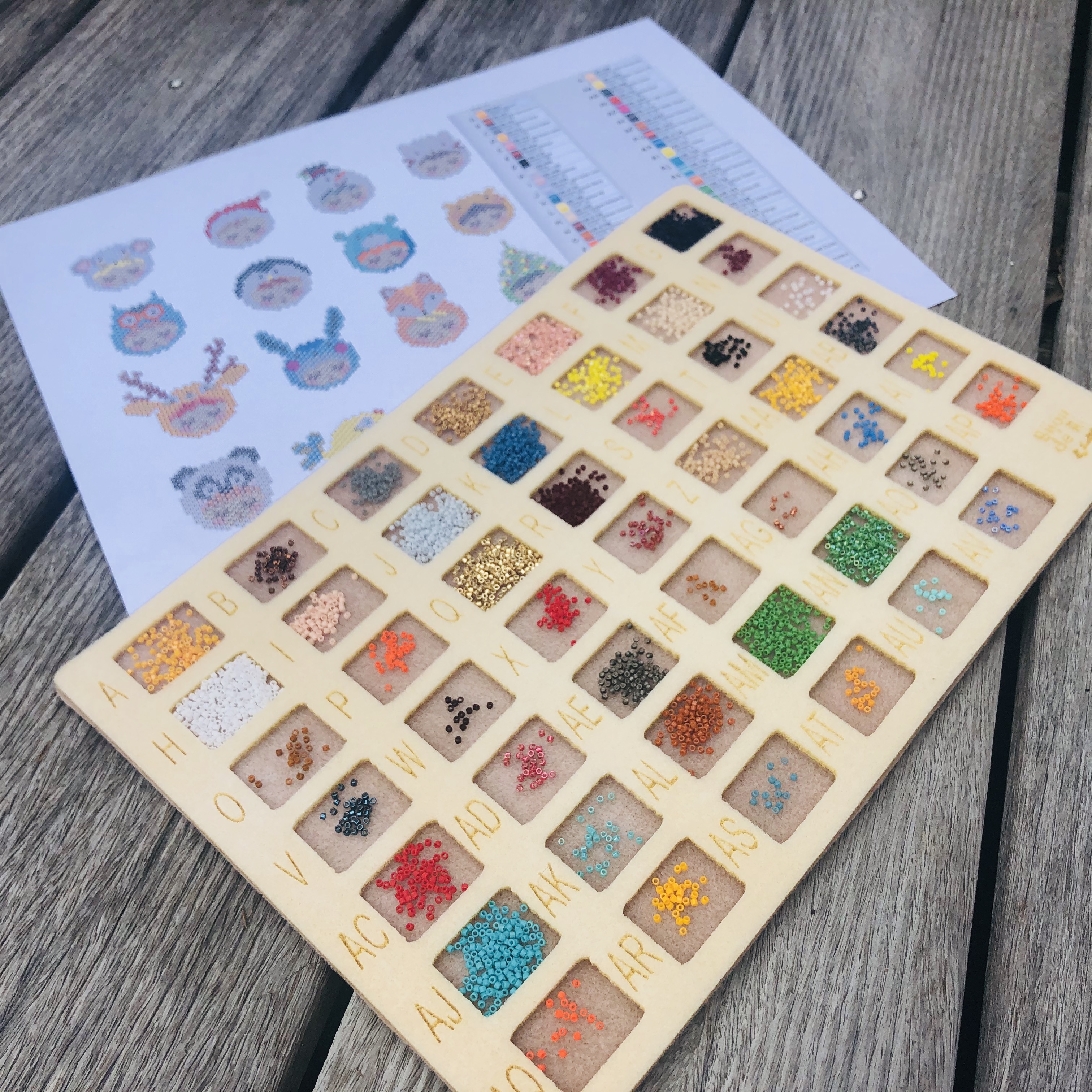 Dear reader of my Blog, dear customer for a day or forever, hello!

Last night, I was in my friend Romain’s studio preparing a special order for Linda, an American who lives in Georgetown, Texas, when I got the idea for this article.

You must have noticed that I love retrospectives (that must be a bit nostalgic on my side!) And I wanted to retrace the history of my bead trays that I consider, a bit like the history of my diagrams, pretty amazing. And I must say that it is mainly thanks to you!

It all started in April this year, at the start of the Covid lockdown period. Here is what my first beadwork tray looked like at the time (photo dated April 18):

It was a simple cloth folded in 4 on which I had drawn the letters of the alphabet in felt-tip pen and placed small piles of beads next to each letter. I think a lot of us do it like this right?

It suited me rather well but presented a rather major problem: with each gust of wind or unfortunate gesture, all the pearls mixed. And I have to say that it happened to me very very often!

So I asked my friend Romain, a carpenter in La Rochelle, who no longer had a job during this period of confinement, to imagine for me a wooden box in which I could store and collect my beads during weaving. .

I had made him a magnificent specification that I share with you with a little shame, I must admit 🙂

And by magic, on April 26, I received my first tray and immediately got down to work to move forward on my Ars de Ré diagram project.

Many of you reacted to my diagram, but especially to my plateau in fact!

With a little difficulty, I made my first video on YouTube to present the set and asked my friend Romain to make ten sets for me. They started to travel the world … The incredible story had begun!

And then, following your requests, several versions of this wooden model were created: with or without bottom, and XL model born on July 4th.

On July 5, my friend Romain seriously injured his hand with one of his carpentry machines. So I took over and learned how to make the trays!

I used the trays a lot but like some of you, I had to get used to grabbing the pearls at the bottom of the boxes. And some had the good idea to cut out boxes of carpet to put them at the bottom of the wooden boxes. One night, the idea occurred to me to completely transform this wooden tray into a tray … of beadwork rugs!

And on July 10, the first carpet tray in the 29 rectangular box version was born with its bottomless version! For the birth of these two models, I also made a small presentation video

And then, following your requests in particular, several models were born and there are now 5 models of foam mats, available with or without bottom and in small or large size, with rectangular, oval or round cavities, as well as a version in the form of a box.

Finally, I wanted to mix wood and carpet, to be able to offer you this version that I really like.

And then there were a lot of custom models. For example, it seems that American beaders prefer to have the letters of the alphabet reversed (but not quite). I’ll show you, it’s clearer! :

Here, I have finished the retrospective of my improvised project on the beadwork trays. They have traveled all over the world, in France, Italy, Germany, Spain, Portugal, Great Britain, but also many to the United States, Canada … and even to Australia!

Some have already anticipated and planned their Christmas gifts in the form of mats or beadwork trays. Thank you !

And thank you for your comments, advice, opinions that allow me to improve and innovate, my goal being to satisfy you and allow you to weave more easily!

And of course, if you have ideas of variations, specific desires, do not hesitate to ask me to study your project.

See you soon and be well!